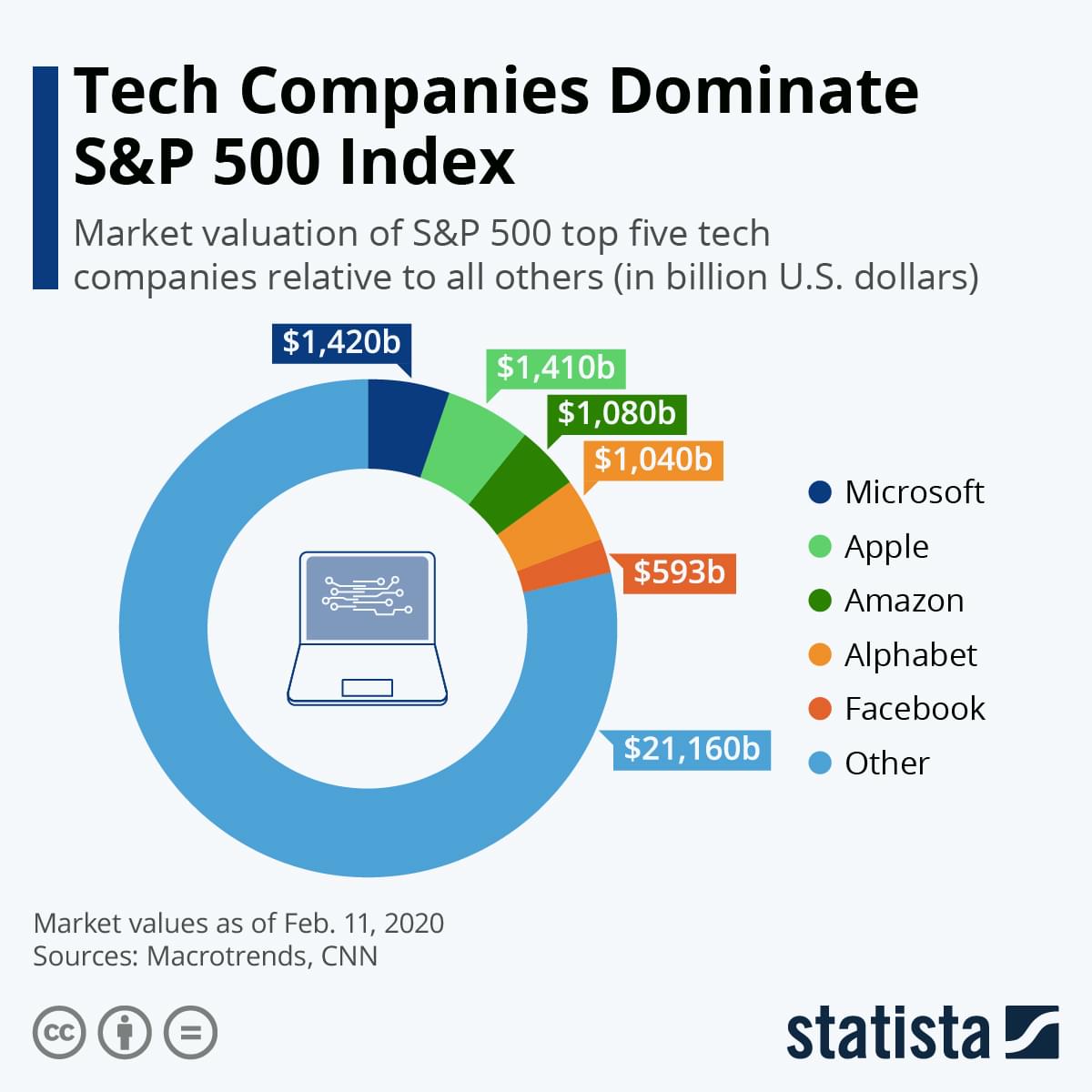 Why is the stock market in the USA for tech booming while many industries are failing?

The US has hit the highest number of recorded cases. Hundreds of people are dying each day. The situation is fragile as numerous companies have filed for bankruptcy, and hundreds of small business owners have nothing to pay their employees. The government is trying its best to keep the country running with various aids and funds.
Amongst all this disaster, there is an unusual anomaly. The stock market is going up day by day. One might think that the economy is collapsing, so how can the stock market be going up. The simple answer: due to tech giants.
The tech companies in the USA are dominating the stock market during the corona outbreak. The stock market is sturdy, all thanks to increasing shares of tech giants.

An overview of performance:

To give you an idea of how well the tech giants are performing, let's look at some stats. The summed value of S&P 500's five largest companies, namely -  Apple Inc AAPL.O, Microsoft Corp MSFT.O, Facebook Inc FB.O, Amazon.com Inc AMZN.O, and Google parent Alphabet Inc GOOGL.O – accounted for less than 20% of the index's market capitalization before the corona outbreak. Currently, the combined value of these five tech giants is $7 Trillion, which makes up about 25% of the index's market capitalization. These five companies alone account for a whole quarter of the stock market. Amazon, Apple, Facebook, and Google amassed a $28.6 billion profit in the first quarter of 2020 alone.
The surge in shares of tech giants has resulted in the steadiness of the USA's stock market.

How are tech giants doing so well?

Now the question arises that what's their secret.

Amazon's cloud computing department reported revenues of $10.8 Billion in the first quarter. The outbreak caused stores to close down, and as a solution, many businesses and consumers shifted online. People started to shop online as stores were closed, increasing the sales and revenue for Amazon. The total profit for Amazon in the first quarter was $5.2 Billion.

The average use of Facebook rose by a staggering 27%, the reason people were forced inside their homes. The primary revenue stream for Facebook is Ad sales, which rose by 10% and amounted to revenue of $18.3 Billion in the second quarter. Facebook's shares also skyrocketed by 8%.

Apple announced its third-quarter revenue, which totaled at %59.7 Billion. This total surpassed Wall Street's expectations. Apple has numerous income streams, namely: iPad, Mac, services, and iPhone. Most of the revenue accumulates from the sale of iPhones. Apple has just announced the iPhone 12 lineup, which is ready for preorder.
"Apple's record June quarter was driven by double-digit growth in both products and services and growth in each of our geographic segments," said Tim Cook, Apple's CEO.

Google parent Alphabet's revenues fell 2% to $38 Billion. This was the first decline in the company's history. The primary revenue stream of Alphabet is Ads. The ad revenue accumulates via Google, Google Maps, YouTube, Google Ads, etc.

Microsoft has the most diverse income streams. The primary income sources are Microsoft Surface, Ads, Windows, Xbox, Azure, and Microsoft Office. Employees were instructed to work from homes, which caused an increase in Microsoft services. Xbox was also purchased for gaming purposes.

I’m Tobi Onyekweli, the founder of Kweli Solutions. We are an IT training firm that specializes in providing quality training and appropriate career guides in areas such as Cloud, Database, Cybersecurity, and Software Engineering. Our style and pattern can be compared to none in the industry we gladly represent. We are the leading firm in IT, and we have successfully introduced innovative ways of teaching IT courses. We will be glad to help you find your feet in your chosen career path.

At Kweli Solutions, we provide a wide range of courses and teaching modules for those who have chosen IT as their career path.